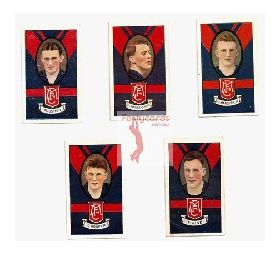 The 1933 VFL Allens League Footballers set is an iconic and probably the most popular trade from the 1930's, with its wide distribution of recognizable imagery. This 72-card set has varying numbers in team set. It also has rear card variations, including STEAM ROLLERS, Irish Moss Gum Jubes & Cure-Em Quick

These are now closing in on nearly 100 years old!

At the same price!